Photograph Bats in Flight with Sabre

Photographing Bats in Flight with the Cognisys Sabre

Contributed and Written by Andrew McCarthy 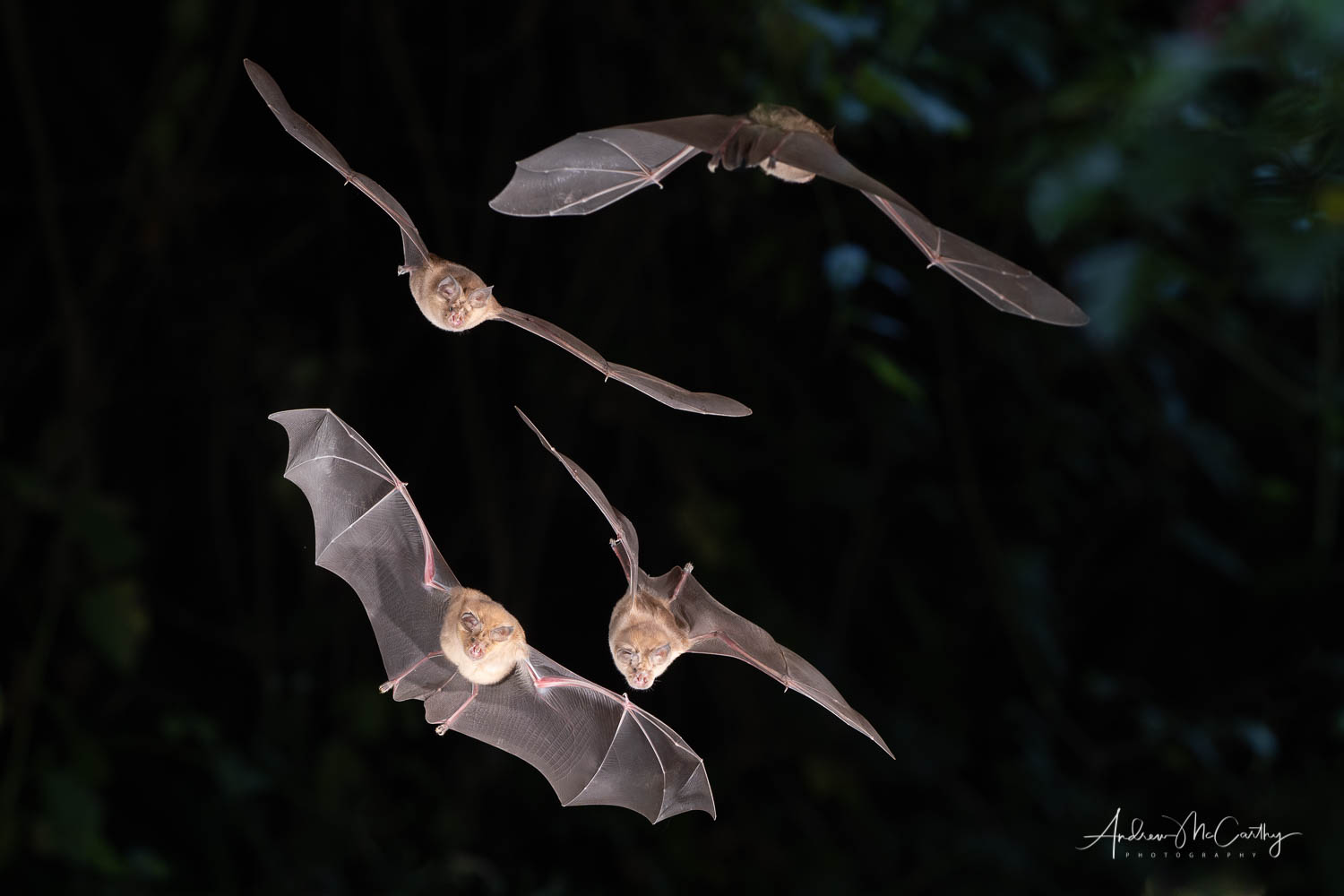 I am a UK-based ecologist and nature photographer who has been surveying bats for over 20 years, and photographing them in flight since spring 2020. My UK bat survey license allows me to use flash at roosts as an incidental part of my ecological survey work.

I began by photographing the lesser horseshoe bats at a small ‘night roost’ on our property. I used an infra-red camera system to avoid disturbance and photographed the bats as part of my ongoing roost monitoring work. Lesser horseshoe is a rare species in Britain and numbers in this roost are low - usually between one and three individuals per night - but the bats visit regularly so the site was perfect for initial experimentation. 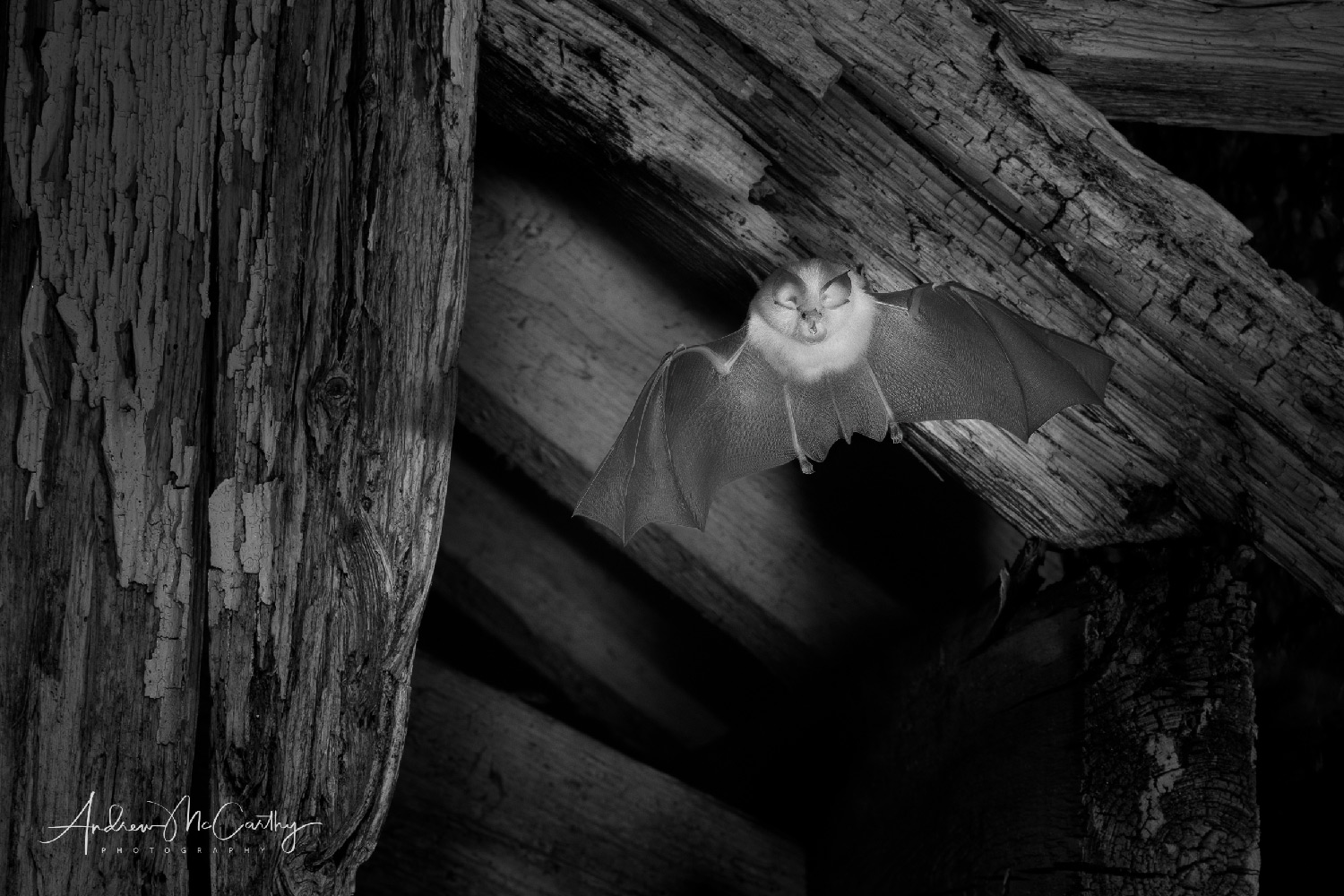 My setup has subsequently evolved and now consists of the indispensable Cognisys Sabre to reliably trigger the flashes and control the cameras. These consist of a micro four-thirds Olympus EM1 III body, a full spectrum converted full frame Sony A7 III coupled with 720nm filters fitted over the flash heads and a Sony A7r IV. Lenses comprise a cheap Sony 28-70mm kit lens (which works surprisingly well for infra-red work) together with the ultra sharp Olympus 40-150 f2.8 Pro and 100-400 Sony GM lenses for longer reach and a different perspective.


Choice of lens and camera is dictated by several variables - the most important of which is ensuring that the bat flight path is not obstructed by equipment. For this reason I’ll sometimes choose a focal length of up to 300mm as this enables me to set the camera around 20’ back from the focus point. The disadvantage of this is that longer focal lengths have a shallower depth of field for a given aperture, so precise focusing and camera positioning (to ensure the sensor plane is as near as possible parallel to the plane of the image frame) are needed to ensure shots are super sharp. I have experimented with positioning a camera set very low on occasion (to obtain shots of bats with spread wings looking down at the camera) but the plane of focus was then diagonally across the image plane, which meant that only bats in the center of the frame were sharp. The small crop sensor of the micro four-thirds Olympus helps here as its effective depth of field is greater for a given aperture, and I am continuing to experiment with this camera. If my equipment needs to run all night I power the cameras with 20,000 mAh power-packs, but the Sabre has a very good rechargeable internal battery so it runs happily for a couple of nights without recharge.

The simplest way of capturing images of bats in flight is to shoot in full darkness and allow flashes to completely illuminate the subject. A beam-type trigger - in my case the Sabre - is then used to fire the flashes whilst the shutter is held open. My flash set-up currently consists of five (AA battery powered) Cactus RF60x speed lights and a V6 II radio trigger that can be plugged directly into the Sabre via the standard Cognisys cable system that comes with the unit.


With speed-lights, the lower the power output the shorter the flash duration, so the power levels I need depend on how far the units are from the focus point. For a distance of just over 1m (which tends to be my default set-up distance) I find that four flashes set manually to 1/32nd power (at f10 or f11) allow me to produce a nicely exposed image at ISO 400. This aperture gives a reasonable depth of field with a full frame camera and lens set at 70mm, but avoids the diffraction softening that creeps in when stopping down further. A 1/32nd power setting gives an ‘effective shutter speed’ of roughly 1/12,000thsec - more than enough to stop motion and give a tack sharp image.

At lower power settings than this the flashes would need to be so close to the focus point (to provide adequate illumination) that they could block the bats flight path. All flashes are set to the same power setting to avoid the ‘ghosting’ which can occur when flash power (i.e. flash durations) are mixed. If I need to control exposure I simply move individual flashes nearer to or further from the focal point until I achieve a balanced lighting effect.


As well as using a very low flash power setting for technical reasons, such settings also help minimize disturbance to individual bats. Even so, as a precaution, I only use daylight balanced flash well away from roost entrances. When photographing bats emerging from their roost sites I use an infra-red camera with IR filtered flash heads; this setup is effectively invisible to the bats and in my opinion it produces a more natural looking monochrome image which reflects the fact that humans do not see in colour at night. 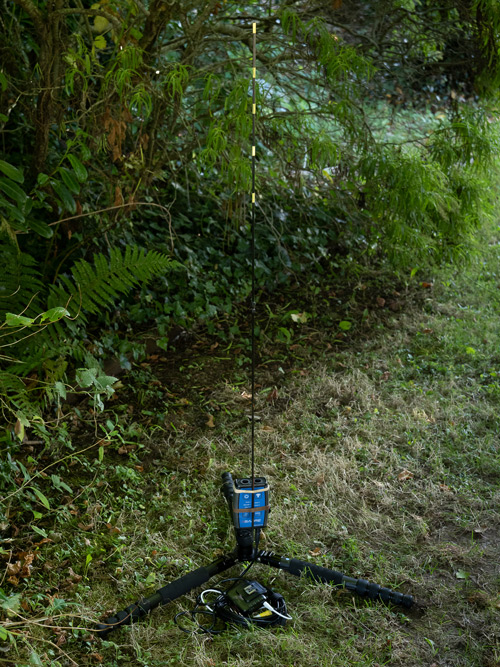 The (very fast) response time of the Sabre means that bats are likely to fly around a centimetre past the beam before the flashes are triggered, and I spent a good deal of time at first figuring out how to find an accurate and consistent point on which to focus. I eventually settled on a simple solution - a die-straight 1m carbon fibre rod scavenged from an old power kite was fixed to the flat front of the Sabre with elastic bands; this enables it to sit perfectly parallel to the beam. I focus on the tip of the rod which is set in the centre of the image frame. Once I am happy that focusing is absolutely accurate I remove the rod and set the beam ‘range’. This is achieved by holding a piece of plastic card over the unit at an appropriate distance from it (usually dictated by how far I can reach!) whilst also pressing the ‘on’ button; this quickly and simply sets the maximum height at which the flashes will trigger. Crucially it means that any vegetation movement overhead does not randomly fire the flashes. I find this simple setup approach amazingly useful and it is one of the many reasons why I chose the Sabre over other trigger options. 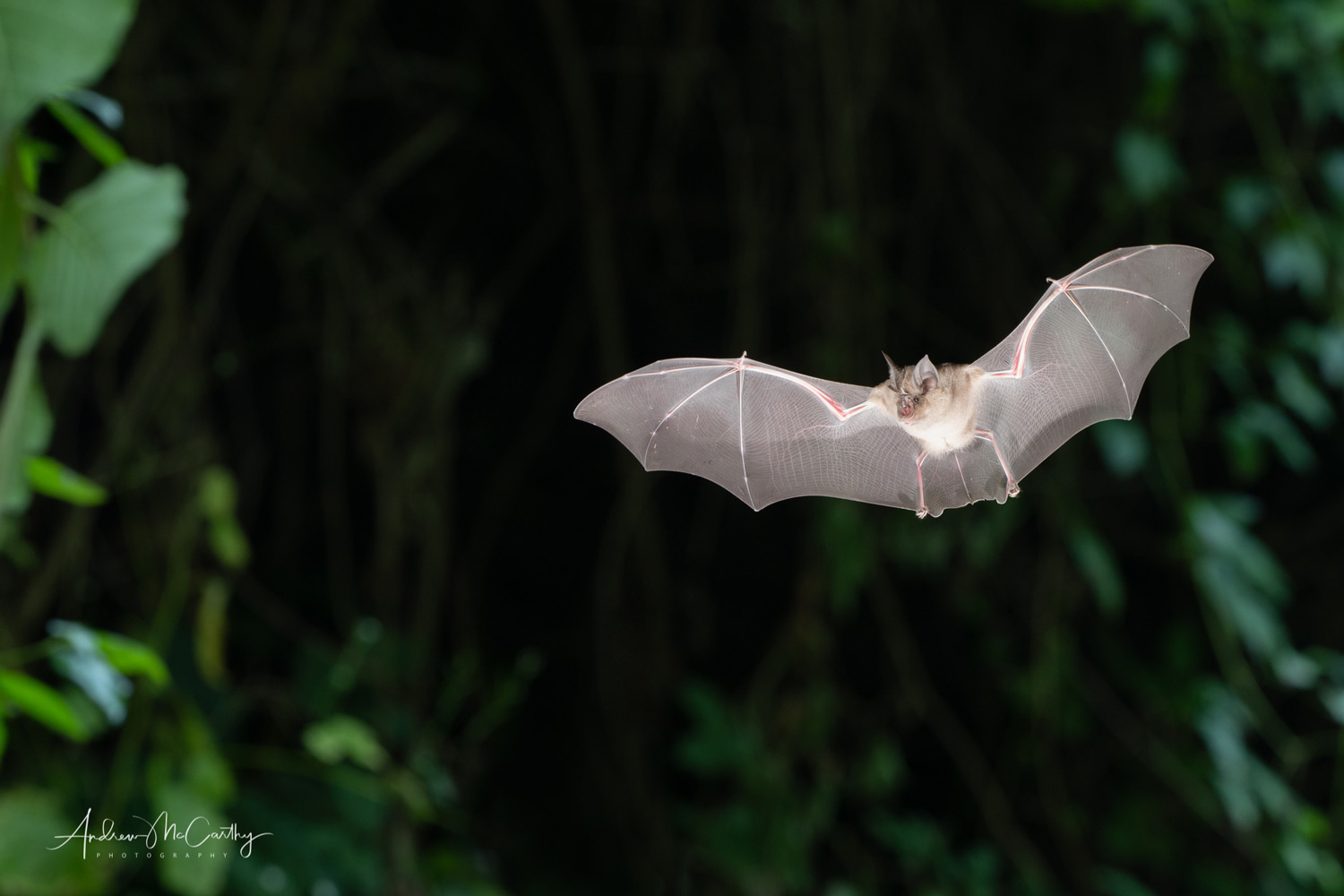 For a single bat per frame (image) use Sabre to control the flashes and camera. Sabre will automatically refresh the frame after it is triggered.

For multiple bats per frame (image) use Sabre to control the flashes but keep the shutter open longer.

The length of time that the camera shutter needs to be open theoretically depends upon the number of bats expected - large numbers passing through the image frame could result in multiple overlapping images during a long exposure. I do not want this effect if I am photographing bats emerging from a small roost entrance since the results would just look odd, so in such situations I allow the Sabre to control the camera shutter in ‘bat mode’. With camera ‘bulb’ mode selected, the Sabre will automatically refresh the frame after a set time to minimise digital noise and automatically advance the camera frame following each flash exposure. This obviously keeps the number of frames down to a reasonable minimum, whilst at the same time avoiding the digital noise that can be associated with long exposures.


When I am anticipating a large number of bats in an area well away from a roost entrance I may want shots with multiple bats in frame - ideally nicely separated and aligned in a pleasing composition! In such situations, I set the Sabre to control the flashes via a flash wireless transmitter, with the camera being controlled separately. I set the camera up in ‘continuous’ shooting mode and use a lockable mechanical shutter release to operate it for an extended period using exposures of around 30 seconds to a minute. This gives ample opportunity for more than one bat to enter the frame. [This approach also completely dispenses with cables, which is helpful if I am using a long telephoto lens set-up some distance from the Sabre / flashes.]

A major advantage of the Sabre over its competitors is that it provides a stand-alone solution. Unlike many other triggers, the Sabre does not need a separate receiver. Whilst working under a woodland canopy for example this is a huge advantage, since it allows the Sabre to be positioned near the ground in a vertical orientation. This substantially increases the chance of capturing shots of bats; the horizontal orientation needed with a separate transmitter / receiver set up would risk missing bats passing through the image frame simply because the typical bat (horizontal) flight orientation is far less likely to break a horizontally-set beam.


When working at height I have also found the Sabre to be the perfect trigger - in large part because it is so easy to operate in full auto mode. In 2020 I used infra-red filtered flashes to photograph lesser and greater horseshoe bats emerging from building roosts during my survey work. The entrances were some distance off the ground, so being able to keep the set-up really simple enabled me to work safely and quickly. The Sabre and flashes were mounted using clamps out of the flight paths of the emerging bats; this was difficult enough with a single trigger unit but it would have been much more challenging if separate transmitter and receivers needed to be carefully aligned whilst balanced on a ladder 25’ up!


In conclusion, bat flight photography can be very time-consuming and trying to get the perfect composition can be incredibly frustrating. All too frequently a shoot results in no bats being photographed at all, with bats being partially out of frame or in the wrong location in the frame (e.g. in a corner). However, when it does work the results can be spectacular and it is certainly a field of photography that is worth persisting with!


Numerous colleagues have given their help, advice and support over the past 18 months in respect of both photography and bat ecology. However, I'd like to say a particular thank you to the following: Tom Kitching and the Vincent Wildlife Trust for facilitating access to an amazing site; to Huw Cox for his patience with my regular blocking of his drive (!), and to Paul Colley for his invaluable technical advice.

Note that all bat images featured in this article were photographed legally in the UK under license where required. Bats are particularly vulnerable when they are emerging from or returning to a roost and therefore it is strongly recommended you check the legal status of bats in your country and consult with a bat ecologist before undertaking this type of photography.

Many thanks to Andrew McCarthy who wrote and contributed this article.

Andrew is a UK-based professional ecologist and nature photographer. You can see more of his work as well as his workshop offerings on his web page at andrewmccarthyphotography.co.uk 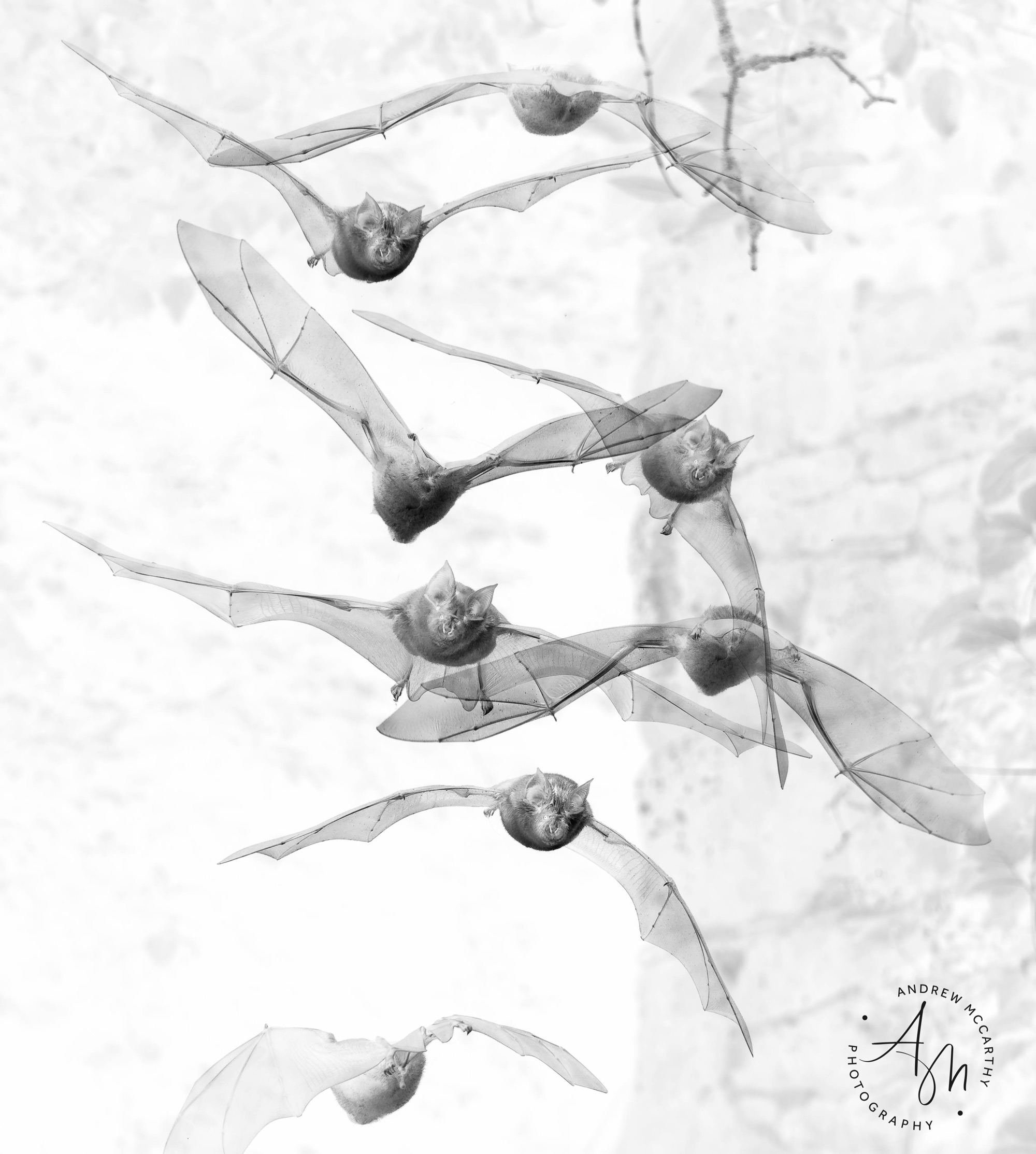 Infra red shot of multiple-bats. The image was converted to black and white; the tones were then inverted in Photoshop to give a creative ‘negative’ effect.

Related Products in the Store

Be the first to review this product
$29.00
Previous
Next