Time Lapse of Boats under Niagara Falls from Cognisys Inc. on Vimeo.

The images that make up this movie were captured with the StackShot 3X and two rotary tables mounted on a pan/tilt bracket. The time lapse was made up of 540 pictures captured at about a 5 second interval. The StackShot 3X was setup to do a pan and slight tilt moving a small amount between each step. Configuring StackShot 3X to do this is extremely easy. There is a helper to walk you through all of the settings. First set up how the axis will be connected followed by the timing you would like for the time lapse (as either an interval or final video duration). Then using live view or looking through the viewfinder frame your start and end positions. That is it! Press the start button and let StackShot 3X do the work. There is even a preview mode - you can record a video in real time running the motion profile you just entered to see what your end results will look like. That's a perfect option for finding framing issues before you've invested hours into the time lapse. Below you will see an image of the setup used to capture the movie above. 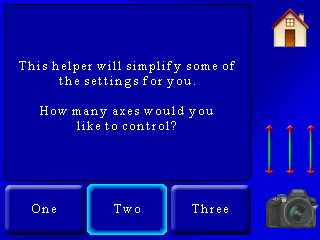 Frame Your Start and Stop Visually 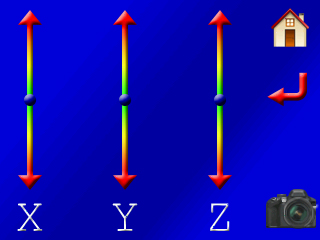 With StackShot 3X there is no need to enter the number of degrees for the pan or tilt (although you can if you want). You can simply use the axis controls to position the camera for the first and last frames of the video. Can you make a more complicated motion path? No problem! Pick when in your movie you want to arrive at this next point, send the camera there with the axis controls and add a key frame. Then you can preview your movie - before you invest hours into the time lapse. The preview will happen quickly which is perfect for recording a real time video to see how the framing for your motion profile will look.

Time Lapse of Milky Way over Alabama Hills from Cognisys Inc. on Vimeo.

This video was also created with the StackShot 3X but this time the third axis was used to control our 1 m Slider. The foreground was lit using a couple of flashes on 1/128th power. You can see our flash lights illuminating the rock at the beginning of the video. As you can see the slider definitely adds additional drama to a video.

What else can StackShot 3X do?