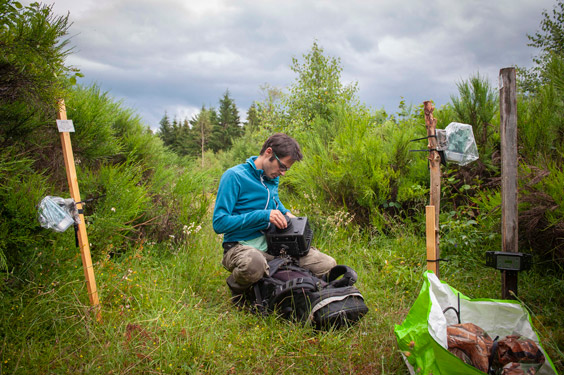 Sure. I am a filmmaker and photographer, focusing mainly on wildlife conservation, but also on science and history. I am trying to focus my effort on subjects that I deeply care about to make a change in peoples minds. I mainly work on film projects, whether short or long, for both NGO and television, but I also make photo stories, most of them about big cats around the world.

How long have you been working with DSLR camera traps?

I started working with camera traps in 2010. At that time, nothing was really available in terms of gear on the market. So I built my first DSLR camera trap myself to be able to start making the images I had in mind. Back then, I was trying to photograph the wildlife of Northern California, but more importantly, I wanted to get a different angle on the subject. What I love about camera traps is the creativity behind it. This is a tool that can help make otherwise impossible images, something that is going to show something that you think you knew, in a different way, and I think this is the work of the photographer.

Could you tell us a bit about this project you have been working on?

In 2015, I worked for a magazine on a photo story about biological corridors. Those are basically a land management method helping wildlife to share the land with us. Land fragmentation is one of the worst things for wild animals, so I spent quite a bit of time investigating eco-bridges and eco-tunnels, those surprising and inspiring constructions above and below highways, helping the animal to cross. During this photo-story, I had some interesting images and in 2017, VINCI Autoroutes (the company creating those bridges and maintaining the actual highways) and I decided to collaborate on the making of a new set of images, pushing the envelope further.

How many camera traps did you have set up? And how long was the project?

The first phase of this project lasted for about 4 months this spring. I installed 8 camera traps on about 5 or 6 bridges and tunnels. We were hoping to photograph elk, deer, fox and I was really hoping to get a glimpse of the elusive European wild cats, even if I knew this was going to be very difficult.

And did the tunnels work?

Yes! I was amazed by this. At some places, deer are crossing several times a day, a real ‘wildlife highway’. And more incredible, I was able to photograph wild cats in 2 of the tunnels I was monitoring. It is great to see that animals, even the most elusive, are using the bridges and tunnels so regularly.

Why did you start using Cognisys Camera Traps?

I wanted a jump in terms of quality. I was very happy with the traps I built myself, but I wanted something stronger and factory built. I was also very interested in the additional features proposed by the Cognisys systems, like the fact that everything was integrated and linked, from the Scout detector to the Scout box.

What was your first impression of the Cognisys equipment?

I was very impressed with the build quality of every piece, but also the fact that most of the ideas I had over the years to improve the system were already in place, and much more. After you have traveled for 10,000 miles, with 200 lbs of equipment, and once you have the equipment out in the field, there is ONE thing that become more important that almost anything else: reliability. You can basically not afford to miss something because of a technical issue, too much is at stake in terms of effort. This is what I like about Cognisys equipment, when I received the gear and started testing it, I realized that it was clearly well built, nothing moves inside, everything is integrated, military graded I would say.

What are the things you like best about the Scout Camera Trapping System?

Difficult to say! I think the best thing for me is the controller inside the box, it handles pretty much everything, the wireless transmission with the detectors, the powering of the camera, the settings. Another thing that made a big difference for me is the use of the big Li-Ion battery, powering the camera and the controller in the same time. Those last forever, it is a way better solution than using a grip and 2 camera batteries. Oh, and being able to test the battery of the camera, without even opening the box is also a great feature.

Are you planning on updating your CAMERA TRAPS e-book with your new methods?

Absolutely, I am currently planning to update my camera trap e-book to include more information about Cognisys equipment I am using, but also giving more images of actual setups in the field, showing how I install the cameras and detectors and why. The new version of the e-book will be free for previous buyers, so that they can catch up for free!

Many thanks to Emmanuel for taking the time for this interview. You can see more of Emmanuel's camera trapping work on his personal web page www.emmanuelrondeau.com and more of his films on his production company website White Fox Pictures.

Find more information on our latest Camera Trapping products including the Scout Sensor and the Scout Camera Box.