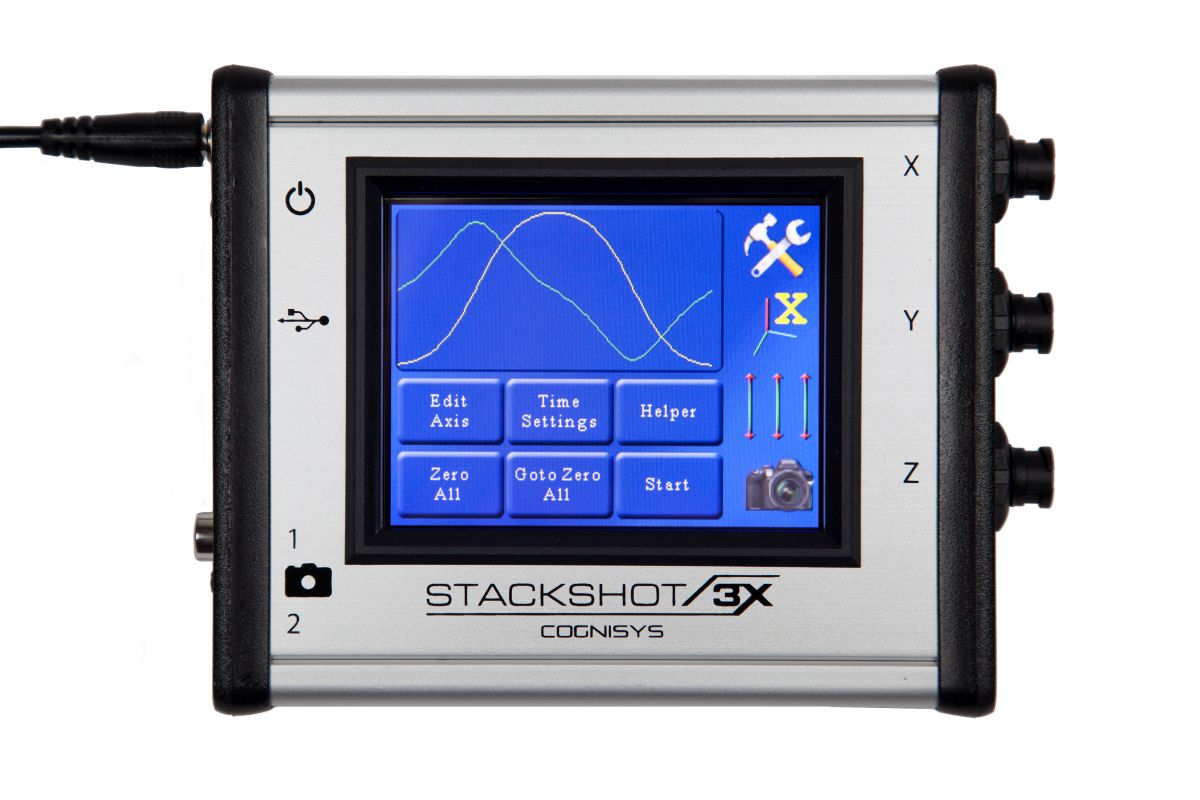 This controller can be used to add motion to your movies, both real time and time lapse as well as automate the image collection process for making virtual objects. The controller includes: The StackShot 3X controller 2A AC adapter The StackShot 3X is compatible with both our standard and extended length macro rails. If you have an older macro rail with the non locking connector you will need an additional motor adapter cable.  Just let us know you need it in the order comments!

There is no macro rail included with this item - if you need a macro rail please check out our StackShot 3X kits.

Do I need a shutter interface cable for my StackShot Macro Rail?
Our shutter cables provide an interface between StackShot and your camera. On one end of the cable is the connector that fits the remote shutter port of your camera and the other end of the cable has the connector to interface to StackShot. It is possible to put StackShot into manual mode and press the shutter button between each step; this is a bit more tedious than letting StackShot control your camera shutter automatically but it can be done. It is also possible to let the PC control your camera and StopShot via two USB ports, in this scenario a shutter cable is not necessary. This mode of operation will prevent you from using StackShot in standalone mode (not attached to a computer). The same shutter cable will work for both StackShot and StopShot. Additional StackShot compatible shutter interface cables can be found here.
Can I control StackShot with my computer?
StackShot is equipped with a USB connection can be controlled with your computer if you have Zerene Stacker or Helicon Remote. You can find more details and connection diagrams here.
If I am going to control my StackShot Macro Rail with my computer do I still need the StackShot Controller?
Yes, computers are not equipped with stepper motor drivers. The StackShot controller includes both a USB interface to communicate with the computer as well as a stepper motor driver that is required to move the motor.
What are the advantages and disadvantages of the Extended Macro Rail?
The biggest advantage of the Extended Length Macro Rail is the increased range of motion. The Extended Macro Rail adds another 100mm of movement over the standard rail. The disadvantages of this rail are its increased size and weight; this becomes important if you plan to do a lot of shooting in the field with your StackShot system. The Extended Macro Rail maintains the same accuracy as its smaller cousin so it can still be used for extremely small subjects. If you do plan on doing mostly higher magnification work >10x we recommend you stick with the shorter rail as it is more rigid than the extended rail.
Can I use StackShot in the vertical orientation?
Absolutely. StackShot has been verified to maintain its specified accuracy in the vertical position with a load of 4.5kgs (10lbs). The 4.5kg limit is very conservative as we have several customers exceeding this limit without issue.
I am trying to use StackShot with a camera exposure time over a 1/2 second and StackShot moves before the exposure is complete. How do I fix this?
There are a couple of ways to configure StackShot for longer exposures. The first is to change the Toff parameter in StackShot to exceed your exposure time. This will add an additional delay to the sequence to give the exposure time to complete before StackShot moves on to the next step. The default option for Toff is 0.5 seconds. The other option is to put your camera in bulb mode and allow StackShot to control the exposure time using Tpulse. In this configuration the time you enter for Tpulse will be the exposure time, StackShot will then wait Toff (500 mS default) and then start the next move.
Have additional questions about ordering and shipping?
Visit our general FAQ page.
Support